This means that people who are dual citizens and who have immigrated to Canada can have their citizenship taken away. In a press release last week government of Canada tried to justify this discriminatory law by associating it with the threat of “jihadi terrorism” but here is the undertone ….. Bill C-24 could easily be used against non-terrorists. For example, a journalist who is convicted of a “terrorism offence” in another country for reporting on human rights violations by the government or an activist taking part in an uprising against a corrupt regime.

Government of Canada has given info-graphics (below) on this new process as opposed to previous process where all the Citizens were treated equally. Link for complete detail here. 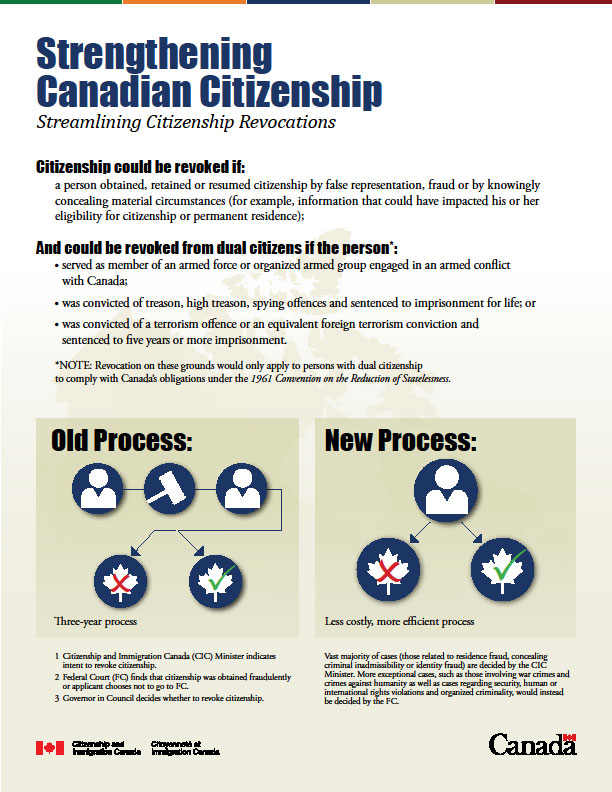 Right now a person get stripped of their citizenship only if they are convicted of crimes that are threats to Canada’s Security or show disloyalty to Canada like treason but legal experts say that there is no reason why that list can’t be added in future. After all the law has been changed. An addition isn’t that hard a thing.

Bill C-24 has turned millions of Canadians into second-class citizens with reduced rights and in turn has reduced the value of Canadian citizenship. Dividing people into different classes that receive different treatment under the law is unfair and un-Canadian.

A brief History till today (taken from CIC official site)

Other measures introduced by the Government of Canada to help ensure the safety and security of Canadians include: