Which countries were involved in war of 1812 ?

Here we will discuss which countries were involved in war of 1812. The war of 1812 was declared by United States of America against British Empire. Why this war was declared is a long debate for some other time but it is enough to say that Americas felt their honor was at stake.

One of our visitors requested a clarification on which countries were part of 1812 war. Simpler answer is ‘United States of America’ and ‘The British Empire’. In 1812, British Empire covered more than present day Britian. It also included British North America (Included Canada and some part of today’s USA), Ireland and American Indian Allies.

The war was fought in three principal theatres. First at sea where Britain blockaded the Atlantic coast of the United States. Secondly at land on Canada and America frontier. America captured Fort Erie in 1813. Thirdly at American South and Gulf Coast where America fought British Indian allies and British soldiers. So in reality the affected parties with lasting impact were America and Canada. Although it was a war between America and British Empire, Canada being British Colony at the time was a big part of this war. Here is a list of all the countries and allies of 1812 war at a glance. 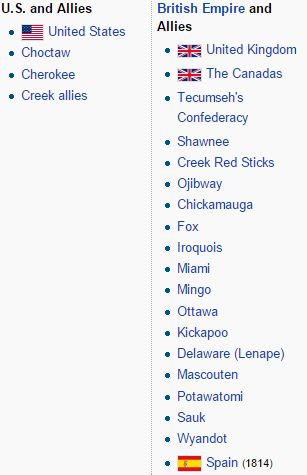 Important Note: ‘British Empire’ is not same as ‘United Kingdom’. Great Britain and Northern Ireland together make up the United Kingdom, hence the full name (“The United Kingdom of Great Britain and Northern Ireland”). I suspect that the UK is probably the only country in the world whose average inhabitant has no idea what its legal name actually is. This defines the area represented in the UK Parliament and for which that Parliament normally makes laws. So it is wrong to say that the war was fought between United States of America and United Kingdom because then it will exclude other colonies and more importantly Canada which was a big part of this war.